S E V E N. What in the world?! This time last year I was packing up our apartment to move into our first home, and stopping by Sherwin Williams with an ever-growing belly every few days at 23 weeks pregnant. Now, I have a baby on my hip and still find myself in Sherwin Williams as I take on projects around the house in-between naps. (Hence, why my projects list for the house that I have had since the week we moved in has been VERY slowly chipped away at.) 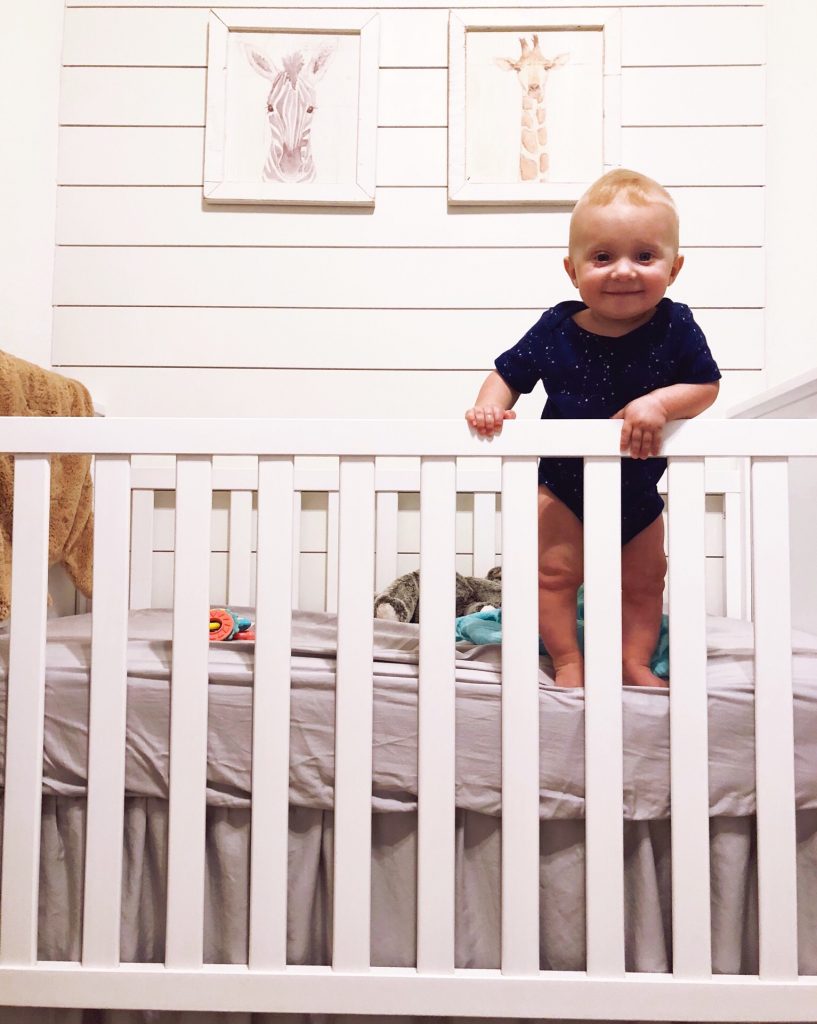 Knox has grown into a wildly active and overachieving little boy. Over the course of the last month he has grown more and more discontent being anything but vertical. He HAS to be standing, so when he discovered mom and dad can’t hold him upward all day long… he figured it out for himself. He started pulling himself up on the side of anything he could manage to, but up until a couple of nights ago, it was short lived and he would plop over after a few seconds. But, there is no plopping over anymore. He is very sturdy- I swear, it’s crazy how fast they develop and grow in new discoveries- and he is all but trying to rock climb up & over everything now. We have had to drop the crib this month, started eating more baby food to give more calories to make up for all he is burning as he crawls and climbs from sun up to sun down, and we get in two very solid naps a day (I will share our 6+ month schedule at the bottom of this post!). I live for making it to nap time, honestly, and I am not ashamed to say it. I only get anything done around the house or any work I want to accomplish during nap time, because Knox requires full attention every second.

He loves books- you can find him crawling in his book bin in his room pretty much any second he is in there. And, he loves babbling about… well, whatever it is he babbles about. He said “mama” for the first time July 5th, and I just about lost my mind. He uses it in his babble, and doesn’t know what or WHO mama really is… but it still is the most incredible thing in the world to hear him say it. I literally laid on the floor, dropping everything I was working on the second he said it, and made him say it to me for about 45 minutes while I gushed and cried.

Knoxy loves his puppy, Presley, and particularly loves crawling all over her. And using her tail as a rattle. She is very patient with him, and loves to give him kisses. We are most definitely teaching the word “gentle”… it doesn’t seem to be sinking in quite yet. 😉

Alas, “no” has been added to our vocabulary in the last month, too. Like, wow. I have never said “NO” so much in my life. He is catching on to this one for sure, and will listen to it about 60% of the time. The other 40% of the time he will turn to look at me, grin, and then keep going at whatever it is he was doing. He is a STINKER, but it’s so freaking cute. Paul and I have to force ourselves not to laugh at almost everything “bad” he does, because it’s just so darn adorable.

As far as feedings go, Knox still has about 20 oz. of breastmilk a day, and then about 20 oz. of formula a day. This is done entirely by bottle and pumping- I haven’t breast fed for about 3 months. And, I ain’t even gonna sugarcoat it… it’s because I didn’t like breastfeeding. GASP. I enjoyed it when he was tiny. But, as he got older, it literally felt like I was just feeding. All day. I would feed for about 45 minutes, burp him, play for a little bit… and before I knew it I was stuck feeding again. It started to spark postpartum depression in me, and I immediately made the change to bottles all the time to give myself a bit more free time. Pumping and bottle feeding is just what has worked best for us and my life schedule. I also do feel it’s taught Knox to be independent, and he LOVES to feed himself. Around 5 months, he started grabbing his bottle and trying to feed himself, so we just went with it. We started by propping his bottle up for him to help him out, and it eventually turned into him doing it entirely on his own.

We let him wake up on his own, which means some days we are up at 6 AM and others at 8 AM. But, the average is 7 AM. I pump 3 x’s a day (I seem to get that question fairly often from you mamas!). I get about 6-8 oz a pumping right now, but sometimes it’s more. Depending of course on the time Knox wakes up, we either do 4 or 5 feedings a day every 3-4 hours. I honestly am such a firm believer in sticking to the schedule firmly when they are newborns, and then it naturally loosens up a little bit. But, the main thing is that they stick to the sleep schedule. Eating times can vary as they get older as long as naps and bed are consistent. We will play with baby food in between a feeding once or twice a week right now. He LOVES the squeezable pouches of food, and I buy the Organics Happy Baby the most. His favorite to date is DEFINITELY the blueberries, apples, and oats one. Though, I avoid the fruit ones as much as possible still right now. We do the spinach based ones most. (It helps develop a love for veggies over sugar, according to my pediatrician!)

As far as things go for me on the mama end, I am feeling great but tired. The month of June has been so exhausting. I mean, truthfully it started to feel like month 1 with Knox, because of how crazy our schedule has been with travel and Paul being gone for almost 2 weeks. I was getting about 5 hours of sleep between travel and not being in my own bed, and Knox being off from travel. And from sharing a room with him. Homeboy was restless with all the travel. Basically… I am grateful that all traveling is done for the time being, and we get to mesh back into normalcy. We all took a toll from the crazy month, though. Paul is currently sick AGAIN with an upper-respiratory infection (yes… again.) We both had this in May… it’s back, and horrible. 🙂 #fanfreakingtastic Knox was having a hard time sleeping while in San Antonio both times I went, so he has been a off, like I said. BUT, it’s starting to feel like he’s back to his routine. And me? Well, I am making it. I dream of margaritas on a beach somewhere… but, for now… I just am finding joy in the day to day while accomplishing projects around the house when I get the chance. Prayer and gratitude is what I live by lately, and it seems to be working.

But, please read: I don’t have it all together. I have had a hard month.

I about had a full meltdown on Monday at the pediatrician’s office. I woke up that day in the crib with Knox, because it’s the only way he would sleep. Though, I was in it for 2.5 hours… and Knox was with me in it only about an hour before Paul took him and left me in there. But, I gotta say… him sleeping in my arms in his bed was probably a top 5 moment with him to date. The rest of my day was exhausting, and I felt loopy as heck from just the weight of travel knocking me over and trying to get back into routine after a month of chaos. I also had a really frustrating business hiccup that I had to all but force myself to handle with grace. I then left for town and forgot my debit card, which I realized only when I had just about made it to the pediatrician. They wouldn’t take us back, because we are on a payment plan and I had to pay for this month’s payment… so, no 6 month appointment for Knox. Is it lame I was most disappointed about this because I love our pediatrician so much and wanted to see her? HA. Then, I couldn’t find my keys. I locked them in the car (or so I thought). So, Paul came to rescue me while I fought back tears for 15 minutes in the lobby. Then… we get in the Jeep and my keys are nowhere to be found… except in my diaper bag that was on my shoulder where I thought they were the whole time but couldn’t find when I searched for them frantically in the lobby. Awesome.

Then, the meltdown came. I let myself cry for 5 minutes. Then, I prayed, sucked it up, and asked for God’s grace. Let’s just say I am grateful for a gym membership that provides childcare. I needed a second desperately.

I tell you this story, because it’s so important to remember NONE OF US have this mom thing down. I definitely don’t. I feel I am doing you a disservice if I don’t share days like this. I am not using my platform well if I don’t tell you all about my bad days. It’s not for pity, not even in the slightest. It’s to assure you that you’re not alone, and we all have crazy days.

GRACE, my friend. Give yourself grace. A woman I love and look up to so much sent me a message to remind me I am human in the middle of my bad day. And that just because it’s a bad day doesn’t make me a bad mom. I told her I feel like a chicken with her head cut off lately, and she said, “Me too.” A woman I look up to as a business leader, mom, and believer who I frankly see as having it all and having it all together… and she could say, “me too.” I felt oddly relieved. That’s why I share. If my “me too” can give you a sigh of relief, then I am PROUD to wave “me too” around with my crazy stories and tears to encourage you.

Below is our most up to date schedule. We always follow Knox’s cues, and it seems his schedule changes up every 3 months with big leaps and milestones. The times change up a little bit depending on when he wakes up, but below is fairly average for him on a daily basis.

**MAIN POINTS: He takes a two hour nap in the morning EXACTLY 2 hours after waking up like CLOCKWORK. Literally, as soon as 2 hours hits, he is rubbing his eyes and I lay him down. His afternoon nap is just about always at 2 PM for 2 hours. He eats 8-10 oz. almost every feeding, sometimes more. His last feeding isn’t quite a full 3 hours usually from his late afternoon feeding, so it can be a little less. I just let him eat until he stops.

Play with daddy after work