We are having a baby.

I literally cannot believe that I am saying that. It’s been so hard to keep it a secret from all of our friends for so long, and from you! Yes, my three weeks of being sick back in April… and I just couldn’t quite shake it… pregnant. Weeks 6-9 to be exact, haha. But now, no more living in secrecy!! We found out week 2… soooo I have kept this quiet for almost three months. (!!!!) And on Saturday I officially start my second trimester. PRAISES. I can’t wait to journey through the next 6 months with you.

Back in December, long story short, I knew I was definitely not pregnant when it was “that time”, and for some reason I was disappointed. I had never ever toyed with the idea of trying since getting married, and I have never even been that kind of girl that gawks over babies and loves little kids. (Does that make me sound horrible?) My friends always joked that I would be the first person to get pregnant just because fate would have it that way for someone who swore she never wanted kids for the longest time.

When Paul and I got married, I knew he wanted babies and that I was not so sure about it. He never pushed or pressured me one way or the other, though. Other than knowing he wanted kids, we never talked about it. He was happy with whatever made me happy. Adoption was always appealing to me, and it very much still is, but the idea of having babies -like the actual delivery process- horrified me. And, I feared having kids that could hate me. (Just being honest.) With all my health stuff, too, I was told it could be really hard to have babies and it could harm me. Babies just weren’t anywhere on my radar.

So then, when December came around and I was experiencing these thoughts of wanting babies, I starting wrestling with that thought and praying through it. Two months later, I still hadn’t been able to shake the thought which is when I reached out to my besties (because, duh) and I decided to bring it up to Paul. We went out for our anniversary dinner at Whiskey Cake, but we started to fight (derp) because Paul left his wallet at home and we almost left. We stayed though, and were waiting outside for our table trying to shake off our little “quarrel” in the parking lot… haha. I knew I wanted to tell Paul tonight, but wanted to wait until we got to our table and the night already didn’t quite start like I had hoped.

We sat down for dinner, and I puked out the words no man wants to hear, “I have something I want to talk to you about.” Of course, Paul thought immediately he was in trouble about something. And I just started talking about December, how I have been wrestling with the thought ever since.. and now this.

Paul replied with a grin and the words “I have been waiting for you to tell me when you were ready.”  Paul had been praying for the Lord to change my heart toward having a baby for months, and He slowly was.

The Power of Community

The biggest influence on my change of heart toward babies was 100% our church community. One of my biggest fears has been if we have kids we would just fall into the trap that our lives become our kids and my marriage is secondary. I don’t want that- I am selfish for my husband and I want to be best friends forever. Mushy? Yes. True? Yes. Having friends our age and doing life with amazing parents our age, and seeing couples with young kids who still choose each other over their kids, and very intentionally do so, has completely changed my fears and view of having babies. I could do this- and the idea became warm to me for the first time in my ENTIRE life.

So we started trying, and by God’s grace the process was freaking fast. Truly God’s grace, because we were told I could have a hard time conceiving with some of my health stuff. I had truly convinced myself I was pregnant the first month, but found out I wasn’t. So the second month when I actually did conceive, I had no clue. I wasn’t letting myself go there, I was traveling for 3 weeks, and truly chalked up every slight symptom I had to travel, sleeplessness, and multiple time changes. We had just sprung forward and then I was in Arizona for a week, which was 2 hours more off my normal schedule. It was a mess!

Symptoms/How did I find out

Okay, so, when everything came together for me and I decided I should take a test, I was laying on the floor trying to workout and the dog would NOT LEAVE ME ALONE. Suddenly, I remembered reading something about how dogs often will know you are pregnant before you do. They become super motherly, clingy, and bark at everything. For a few days, Presley was more clingy than ever and was literally guarding doors and growling at any noise she heard. She legit would lay by the door and growl at nothing as if to warn anybody she was ready for them if they did decide to intrude. I had also been so freaking hungry for a couple of days, too, y’all. Pickles are not strictly a pregnancy craving by any means, I eat them all the time. BUT, I went through an entire jar of pick halves in less than 24 hours, and started on the Bread and Butter pickles. I was eating broccoli by the loads to try to fill my hunger without regretting it.

I popped up and told Paul, “okay, that’s it. I am going to get a PG test. I just gotta know.” He was like, “Wait- you think you might be? You haven’t had any symptoms have you?” Everything was coming together in my head finally, and I realized maybe all of this wasn’t just because I had been traveling and was off my routine…

I went to Target down the road, and I was so uncomfortable buying a PG test, that I walked around the whole store and managed to pick up two pink bath towels that were on sale for $5. Then I grabbed a test, stuffed it between the towels, and went to self check-out. I know.. so stupid. I don’t know why I am so awk.

Anyways, you can put the rest together. It was positive and here we are a couple days away from our second trimester. I cannot believe how fast things have gone, and I am just getting more excited by the second. This morning was our 12 week exam, and baby Morrison is healthy and heart beating strong! It still takes my breath away every time I hear it, and it’s such a reassurance. As my first trimester symptoms have died down so much the last week or so, I started to think maybe I wasn’t pregnant anymore. The anxiety before my 12 week exam was REAL.

I have logged everything the last few months to share with you guys throughout my pregnancy, and I vow to be real and honest about everything I am experiencing while also being super clear that everybody’s body is different and every pregnancy is completely different!

The main surprise for me so far? How much weight I have LOST (despite my eating of 7, yes SEVEN, chocolate chip pancakes yesterday… errrr…). Every woman is different, but I have definitely lost weight and wasn’t expecting that. I am just ready for that little bump!

Now, about this sunrise photoshoot with Cottonwood Road Photography… holy moly. I literally cried during the shoot and totally cried when I got these back. I am so thankful for this images, they seriously capture our joy so beautifully. Thank you so much, Hannah Hagaman! 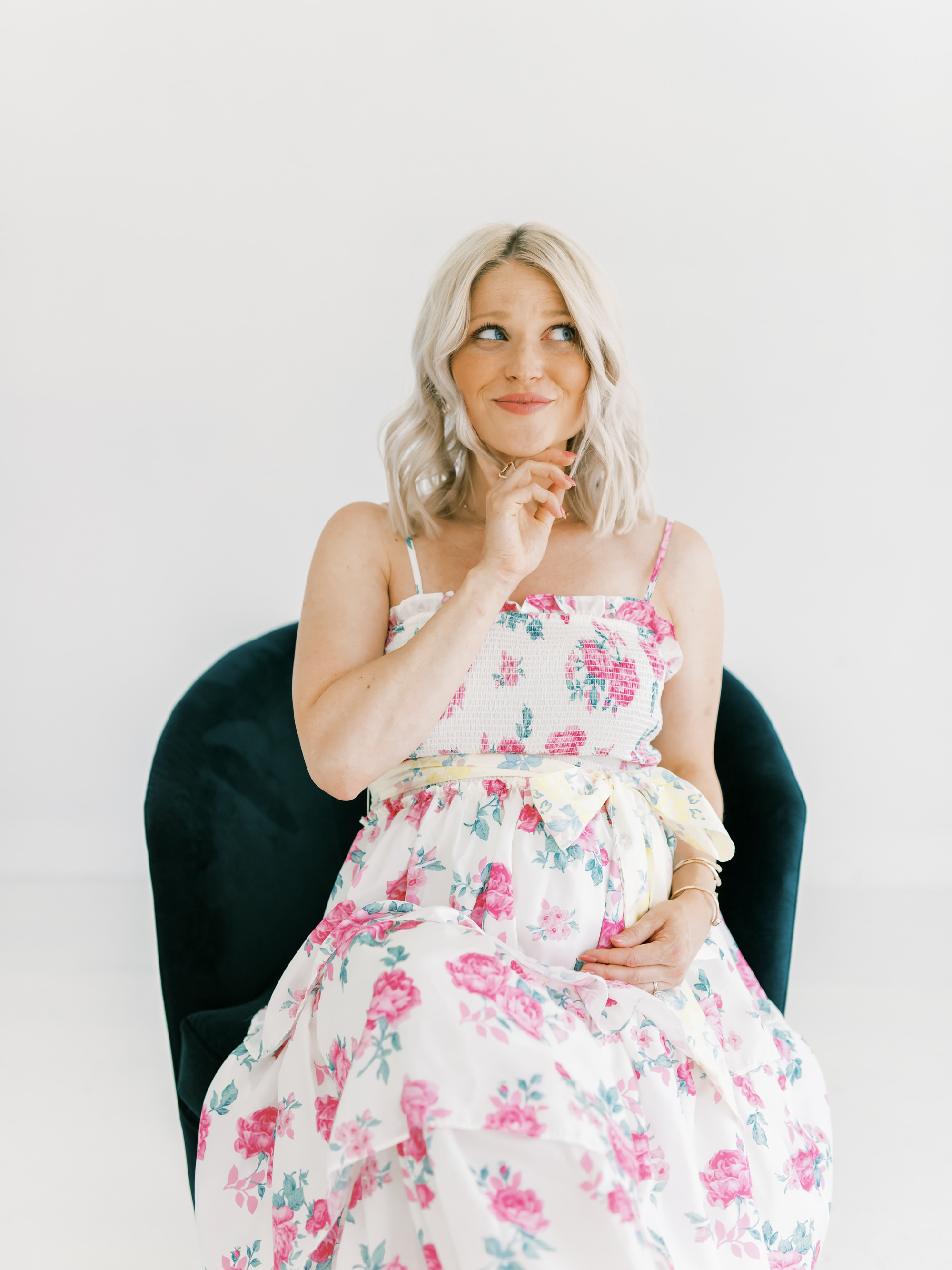